Start a Wiki
Hector is a big black hopper truck and brought by Bill and Ben. He has big letters H.E.C.T.O.R on each side. He is voiced by Keith Wickham in UK, and Kerry Shale in US. His nickname used to be "Hector the Horrid", as he biffed Bill and Ben and scared Rosie, but Thomas stood up to him, and after helping him overcome his fear of being loaded with coal, Hector is now good friends with Thomas and James. 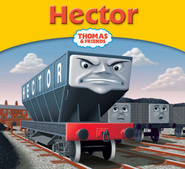 Hector on the cover of his My Thomas Story Library Book

Hector, as seen in Hector the Horrid

Hector feels sad after he is pushed into a pile of coal by Thomas and derails
Add a photo to this gallery
Retrieved from "https://scratchpad.fandom.com/wiki/Hector_the_Horrid?oldid=3042139"
Community content is available under CC-BY-SA unless otherwise noted.