An illustration of Duncan in The Railway Series 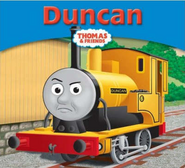 Duncan on the cover of his My Thomas Story Library Book

Duncan in The Railway Series map

A Tunnel collapses on Duncan as a result of him doing his favorite thing, Rock N' Rolling 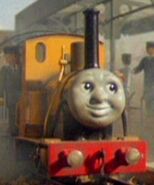 Duncan derails as a result of doing his favorite thing, rock n' rolling

Duncan is scared of the ghosts in Duncan Gets Spooked

Duncan falls into the mud in Dunkin Duncan

Sad Duncan in Home at Last

Shocked Duncan in Home at Last

An image of Duncan from the Railway Series book, Gallant Old Engine

Duncan and his nameplate

Douglas dressed up like Duncan
Add a photo to this gallery
Retrieved from "https://scratchpad.fandom.com/wiki/Duncan_the_Stubborn_Engine/Gallery?oldid=2936815"
Community content is available under CC-BY-SA unless otherwise noted.