Diesel 10 is a large diesel engine with a huge claw attached on top of him. He is the Second main antagonist and described by Thomas the Tank Engine as "10 out of 10 for devious deeds and brutal strength, But the Tertiary Antagonist in Day of the Diesels, the blast from the past who hates steam engines." Diesel 10 is the main villain in the film. He likes to cause chaos and scare the other steam engines. He was said to have been on the island before, and has returned to find Lady, whom he almost managed to destroy. Diesel 10 did find her near the end of the film, but during a chase, he fell from a collapsing viaduct and was sent plunging down into a barge full of sludge. He did not make a reappearance until the full-length special, Calling All Engines. He was voiced by Neil Crone. He also appeared as a character in the special, Calling All Engines, where he works mainly in the scrap yards, picking up scrap metal and dumping it into trucks. A lot of the steam and diesel engines were afraid of Diesel 10. He was later seen clearing tree branches from Gordon's Hill, where Thomas persuaded him to help clear the tracks at the airport. Although he is a very grumpy diesel engine, Diesel 10 agrees and helps to clean the wreckage, allowing Thomas to retrieve George to flatten the runway. Footage of Calling All Engines with Diesel 10 is seen in the Season 10 interstitial segments. In Calling all engines when Diesel 10 was helping out Thomas and the other engines doesn't mean he can't go back to being an evil engine, and may imply the special takes pplace before the series. Diesel 10 is based on a British Rail Class 42 with yellow paint scheme and a black claw. Not always ,but sometimes he takes charge of all the other Diesels.   He sports an overhead claw which he referred to in the first movie as "Pinchy". He is voiced by Matt Wilkinson in both UK and US. His fate in Magic Railroad is that he falls off a bridge and into a boat after chasing Thomas and Lady. He does not have a fate in Calling All Engine or the Great Discovery, because he is friendly in Calling All Engines, and he only cameos in Great Discovery. His fate in Day Of The Diesels is that he is found out by Sir Topham Hatt for taking over the Steamworks and is forced to work for steam engines. In the seventeenth season Diesel 10 will take Christmas decorations from Tidmouth Sheds. It is likely that Calling All Engines, the Great Discovery, and Day Of the Diesels are set before Magic Railroad, and Diesel 10 was embittered into his movie self by the events of the specials. This is especially plausible because the specials are set in the 1950s while the movie is set in the present day. 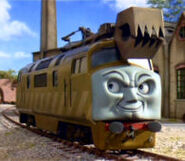 Diesel 10, as seen in Thomas and the Magic Railroad

Diesel 10 screams when he is showed a suger by Mr. Conductor 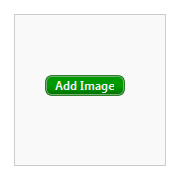 Diesel 10 hanging from the viaduct

Diesel 10 floats away in a garbage barge 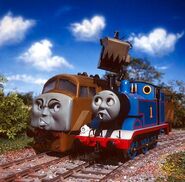 Diesel 10 with the other diesels in The Great Discovery

Diesel 10 in Day of the Diesels

WARNING: You may add parodies. But, do NOT delete any. Complete parodies list